Janine Rainforth - Maximum Joy co-founder and frontwoman’s career was cut short by assault and trauma. Four decades on, she is back.. The Guardian March 2019

“As Rainforth forges a new musical future, it’s important not to divorce it from her fearless and catalytic past.. Releasing these long-gestated ideas into the public sphere, and especially returning to the stage after over two decades, took some guts..” Rainforth’s new work comprises rich, blurry lullabies which flow sonorously through space, dripping searching keys over shuffling rhythms and, of course, Rainforth’s piercing but pining vocal. It’s a sweeping, ambient sound which recalls another strand of 80s alternative in the otherworldly ethereal wave of Liz Fraser’s work with This Mortal Coil, or even the contemporary avant-pop of Zola Jesus or Glasser. “Geraint David - Crack Magazine

Lead singer and original co-founder of post punkers Maximum Joy, Janine Rainforth returned to performing music in 2014 after an absence of decades.

Rainforth is working on a new solo album due for release later in 2021, she says it’s partly as a response to speaking publicly about the serious violent assault, her music career was cut short and how she has made a return to it, for the first time in March 2019.

Her career in music and with her band Maximum Joy was effectively cut short by a serious violent sexual attack and trauma from within her close professional circle. The people around her did not support her so she had no choice but to leave the band she’d formed. Knowing only this as her career and her vocation she didn't give up and went quickly on to form a new band (Leonard & The Cats) with previous players of PigBag and The Cortinas. But something new was happening - she found she’d freeze and shake every time she tried to perform – in rehearsal or the studio or live, she had no idea at the time what was causing this. It eventually meant she simply couldn’t perform and carry on with the only thing she knew and wanted to do, she had no choice but to retreat from her music career. Janine has only recently realised after conversations with experts that this was a direct result of the trauma she'd experienced.

Now after many years out of public music making and performing she has forged her way back to the vocation she had to give up and is truly passionate about, she is singing and making music again publicly. Rainforth self-released and performed her first solo tracks in 2014.

One of her first live performances was supporting her old colleagues The Pop Group. 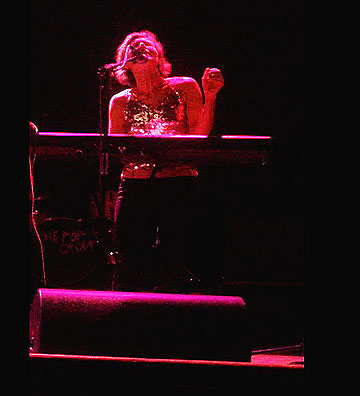 Then in 2015 she spearheaded the reforming of Maximum Joy to perform at Simple Things, and from that formed an offshoot band MXMJoY in 2016. MXMJoY brought out their first album P.E.A.C.E. on Janine’s London Field Recordings.